What is a vehicle logbook?

In addition, the vehicle logbook works as a summary of the vehicle’s key statistics: make, model, engine, etc. The chassis number is also recorded. The V5, as it is often referred to, provides a physical copy of the information the DVLA holds in its database.

Why do I need a vehicle logbook?

The vehicle logbook provides an interesting summary of your car’s information, but why do you need it? Many owners or drivers end up shoving their car’s logbook far back into a dark recess in their clothing drawers. They may even forget they have one altogether! So what’s the big deal?

If the logbook describes a red, two-door, four-cylinder car, but you see a blue four-door, something’s not right. Thus, the logbook helps to protect buyers and sellers alike. The logbook offers assurances that the seller is authorised to sell the car, and that what he says he is selling you is exactly the vehicle you’ll receive. NEVER purchase a vehicle from someone who can’t or won’t show you the logbook for the vehicle.

How do I replace it?

While many other DVLA documents are online, the logbook remains available only in a physical form. When you update, sell, or dispose of a vehicle, you must fill out the appropriate forms in the V5C, and send that information into the DVLA. There’s no need to replace the logbook. At the sale, you’ll record the details of the transaction and remove the “V5C/2, New Keeper’s Details” form. The old logbook stays with you, while the new owner updates the tax information and records the sale. They will be issued with a new V5C from the DVLA. You can send the old V5C form to the DVLA, or use their online form to notify them about the transfer.

It is not unusual to misplace your V5C form, since most people do not keep it with the vehicle itself. There’s no need to panic if this occurs. You can apply for a new V5C via post. Just download the form here, complete it, and send it in to the DVLA. Be aware that there is a £25 fee for V5C replacements.


Here’s the moment you’ve been waiting for, here’s what the front of a vehicle logbook actually looks like: 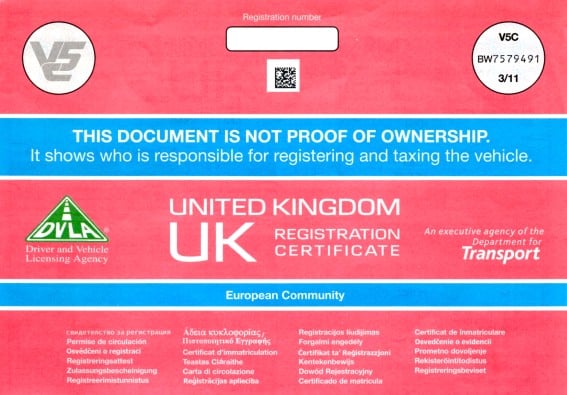 How long should I keep my vehicle logbook?

As covered previously, you should keep the V5C as long as you have a particular vehicle. Once you’ve sold or scrapped the vehicle and notified the DVLA, the old V5C is worthless. At that point, you are free to disregard the logbook.

As covered previously, you should keep the V5C as long as you have a particular vehicle. Once you’ve sold or scrapped the vehicle and notified the DVLA, the old V5C is worthless. At that point, you can bin it, burn it, whatever.

The vehicle logbook is one of the last hard-copy holdouts in a digital age. Keep it someplace safe with other critical personal documents, to prevent your needing to make that extra £25 donation to the DVLA. And remember, while the form is still physical, many of the extra steps (such as demonstrating the sale of a vehicle) can now be done online.

Current V5C forms are red; they used to be blue. If you still have an old blue form, the DVLA encourages you to update to a red one for free.

The DVLA maintains an informative webpage with further details on the V5C and how to contact the DVLA with any questions. You can reach them here.