Car recycling is a great way to get rid of old car because no matter what state your car may be in the majority of the vehicle can be recycled and reused. At Giveacar we can guarantee that all of our salvage partners will reuse at least 95 % of your donated car in accordance with the European End-of-Life Vehicle Directive. So if you are environmentally conscious and are worried about the environmental impact of unnecessary new car production Giveacar is a great way to ensure your unwanted car is reused. 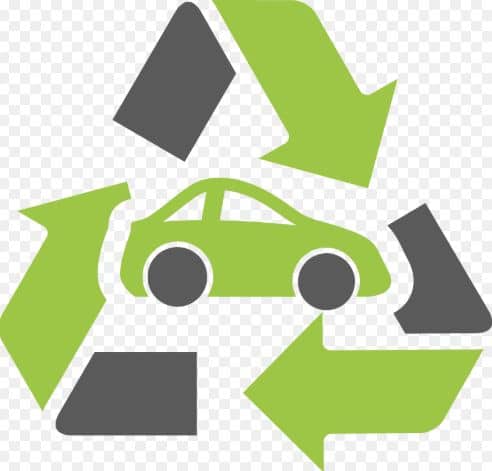 There are a lot of components within a donated car that can be used again in the same function. For example, the battery can be removed easily and placed into another car. The same goes for things like the tyres and the seats. Recycling these types of components makes it easier for people who would simply like to fix their car to do so. This reduces the demand for new cars, which will reduce new car production and the negative impact this production has on the environment.

The majority of the not-so-easy to remove parts can also be recycled and reused. This includes the metal used to construct the shell of the car. During the scrappage process, these metals will be separated and repurposed ready to perform a new function. The metal used to construct cars is valuable. This is what allows you to create such a large donation just by scrapping your car.

Europe is heavily reliant on importing many raw materials, including paper, glass, plastic and metals, so the more materials we can recycle, the better. By recycling more, and wasting less, we can all help the environment by reducing the number of raw materials consumed and also the amount of energy needed to create and transport materials. Even better, recycling can also help the economy! www.wrap.org.uk notes that:

“Globally, 30% of the worldwide demand for resources in 2030 could be met through available resource improvements worth up to $3.7 trillion each year.” And “since 2002/3, material ending up in landfill has reduced by 36 million tonnes per annum and councils and businesses have been able to avoid around £1 billion in landfill tax”.

Landfill sites have been linked to a wide range of illnesses, especially breathing-related problems. They require land, they pollute the soil and water supply, and can release potentially explosive gases which are 25 times more potent than carbon dioxide.

To tackle the problem of landfill sites, the EU introduced Landfill Directives in 1999. These introduced strict new rules on the use and operation of landfill sites and forced EU countries to reduce the amount of waste they put in landfills. The laws were very effective and caused many sub-standard landfill sites to be closed across Europe.

The importance of proper car scrappage and recycling can’t be stress highly enough which is why the process is maintained by a series of strict environmental standards. Giveacar only uses Authorised Treatment Facilities that are regulated by the Environment Agency. All of our salvage partners ensure that the hazardous materials present in a car will be dealt with appropriately. This includes minute parts, such as the mercury light switches, as well as various chemicals, such as the engine oil and remaining fuel. This way we can guarantee that these potentially dangerous materials won’t simply be left to pass into the earth.

When using Giveacar you are not just making a difference to your chosen charity, you are also helping to promote environmental wellbeing.

Once a vehicle has reached the end of its life it will be taken to an Authorised Treatment Facility (ATF) where it will go through the following three stages:

When a vehicle goes through the depollution process it means that it is having all of the hazardous materials or components safely removed as required by the Environment Agency. Depollution is important because end of life vehicles have various elements with the potential to harm the environment. Windscreen wash, coolants, antifreeze, batteries, oil and fuel are all examples of contaminants which need to be disposed of with care to protect both the environment and people.  If one of those substances were to enter the food chain or water supply it could create a number of health problems therefore they must be removed by professionals to ensure correct and safe disposal.

Once a qualified person has depolluted a vehicle the parts will be stored and passed on to specialists who will break them down to reuse as something else. For example; tyres are often shredded and broken down into pellets before being reused as football pitch flooring. Whereas car batteries will be removed and either sold as spares, or disassembled for their components. Battery components include; distilled water, silver, lead, acid and plastic and once the ATF has neutralised the acid and purified the water for safe disposal, they will then melt down the metals to be repurposed. Only ATF’s can do this as all hazardous substances must be recycled and disposed of by licensed specialists.

When a vehicle goes through a depollution process, the fluids are drained.

This part of the depollution process involves removing all of the car’s fluids safely. This will include the fluids mentioned earlier and they will undertake various techniques including; filtration, distillation and reverse osmosis. Once these substances are drained the vehicle’s chambers will be flushed through to ensure no residue remains.

Once the hazardous liquids have been removed, the vehicle will be dismantled. This process involves:

Palladium, Rhodium, and Platinum are just some of the precious metals found in catalytic converters. These metals are removed and reused in various pharmaceutical products, electronics and even jewellery – including wedding rings! Alternatively they can be reused in the production of new catalytic converters. However, regardless of what the catalytic converter is reused for, it should only ever be recycled by a trained professional as once the ceramic interior is opened and exposed to the air it is considered hazardous waste.

As far as materials go tyres have always been one of the harder materials to source a second use for. If the tyres are only part-worn they can be used again on another vehicle, but if unable to be re-used as tyres, they can often be used in their raw form on road beds, race and running tracks and even playground mulch. 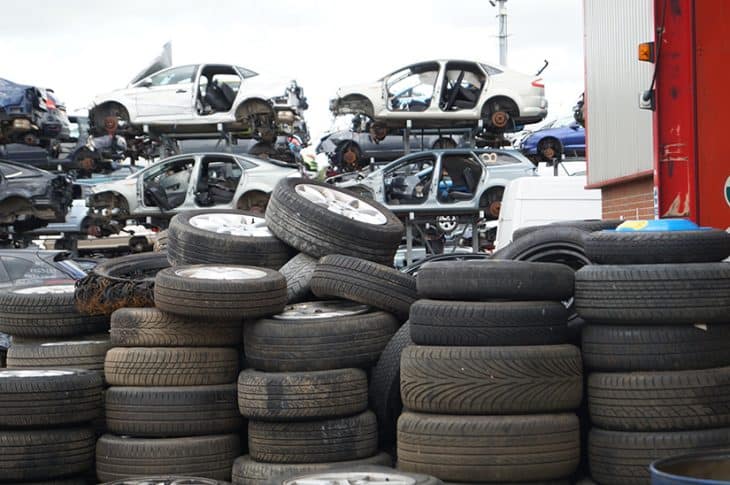 Glass is an incredibly versatile material and due to its composition can be recycled over and over again. Uses for glass can be anything from; ornaments, tiles, doorknobs or it can even be shredded down into builder’s sand.

Magnetic Separation:
Typically, the majority of steel is magnetic and so it’s relatively easy to separate from other recyclable materials such as plastic.

Detinning:
Most vehicles have a thin layer of tin over them which prevents the vehicle from rusting. This is great on a car however it is not necessary when a vehicle is being scrapped and recycled, and so the thin layer of tin is removed. This is done by a process called ‘detinning’ and happens by placing the scrap in a hot caustic soda solution which dissolves the tin coating. Once this has been done the tin can then be recovered in a variety of ways, including; evaporation and crystallisation using sodium stannate, electrolysis or using hydrous stannic oxide and acid.

Melting:
Once the steel has been separated and the layer of tin removed, the steel is placed into a furnace to be melted down. Once this is done the steel will be poured into casters and rolled into new steel flat sheets. This process can be done repeatedly without the steel losing any of its strength and when the steel is repurposed into flat sheets it can reused again as many things, including cars and construction materials such as Rebar; a material commonly used in the construction industry to strengthen and frame concrete structures.

Statistics show that this method of recycling steel uses 75% less energy and resources than producing new steel from iron ore. In fact, recycled metals actually account for around 30% of metal production worldwide! Since the year 2000 the End Of Life Vehicles Directive set and met an initial target of recycling 85% of end of life vehicles and due to its success, as of last year the target of recycling has increased to 95%. As a result of current UK legislation regarding the recycling of scrap vehicles, Authorised Treatment Facilities are required by law to make the process of recycling an end of life vehicle as simple and as easy as possible. Because of this a vehicle’s owner is entitled to a free method of disposal when the vehicle reaches the end of its life, and as a result the owner shouldn’t have to pay for the removal of their vehicle. However, there are some companies who will purchase vehicles to take to ATFs themselves, who will try and charge for the collection of a scrap vehicle.

When recycling a vehicle through our service you don’t have to worry about this, or any other fees, as we ensure that disposing of your end of life vehicle never costs you a penny. To cover the costs of processing your vehicle we do take an admin fee,  but this comes from the value of the vehicle and is not a charge to you. Giveacar is proudly transparent and here to help at every stage of your donation.

We had an old car. Junkyards weren't interested: wanted paying to take it away.

Contacted Giveacar and they had it removed quickly and efficiently and donated £100 to a local hospice. What more can you ask?
T. Payne, Flintshire