World Protection for Dogs and Cats ( NoToDogMeat Foundation) is a charity set up in the UK to help end the dog and cat meat trade and lessen the suffering of companion animals brutally tortured for food every year. Supporting us will help fund education and awareness programmes as well as our rescue missions.

No, To Dog Meat Foundation was set up in 2013 by a group of animal-loving volunteers who witnessed the horrific cruelty dogs, and cats are subjected to in Asia when they are killed for food and fur.

The charity works to support local grassroots groups who share our vision to promote kindness to animals. In 2018, the United Nations recognised the charity and granted it consultative status.

We run a sanctuary in China with over 450 dogs and cats needing care and new homes in the UK.

Our challenge is huge, and we are grateful to a growing number of Asian activists who have joined our cause:

In South Korea alone, over 2.5 Million dogs are eaten yearly. Every summer, a two-month-long dog meat-eating festival takes place, and up to 15,000 dogs and cats will die each day. There is no regard to the Universal Five freedoms which all animals deserve. What is shocking is that torture and slaughter frequently take place in front of children.
In China this figure is close to 10 Million with dogs skinned alive, their fur then sold for cheap clothing. Horrific Dog meat festivals such as in Yulin are commonplace, and there is no regard given to health or sanitation. Activists are frequently pushing for welfare laws to be created, and our team is working on draft legislation.
Koreans believe the more the animal suffers, the better the meat tastes. This means the dogs will be beaten, blow-torched alive, and cats are boiled to make soup and elixirs. Imagine a kitchen full of pressure cookers where cats are plunged into hot water alive. The cruelty happens in a sophisticated country, the home to Samsung, LEG and Hyundai.

In Thailand, pets are stolen or bought for a plastic bucket and then sold, trafficked into Vietnam for nearly $250 each where they await the most unspeakable torture.
And, in Indonesia, dogs are burnt alive in open markets just minutes from tourist attractions.
This epidemic of cruelty which extends throughout Asia and beyond has no place in our

No, To Dog Meat respects cultural differences but disagrees with the systematic torture dogs and cats endure for food consumption. How can boiled puppy juice be the new viagra? How can dogs, fed on rotting waste of packed tightly in cages, transported for hours without food or water be humane? It is not farming. It is ( for the most part) an illegal, unregulated industry, run by criminal gangs and fuelled by greed. The cultural practice of deliberately making an animal suffer to alter the taste is not and never has been acceptable.
It is time for a change, and No To Dog Meat stands firm and marches forward peacefully with that goal in mind. The pandemic has shown us we need to respect living creatures.

Cruelty is Not Cool! 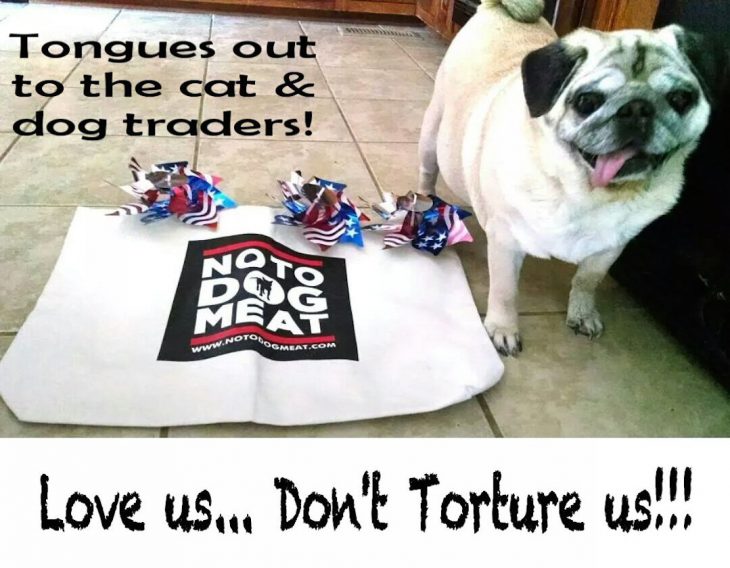