Our primary goal is to open a retreat in the North West of England where families who have children with life-limiting or life-threatening illnesses can take respite breaks and time to relax, recharge, remember and rebuild.

Reuben was enjoying a family holiday in Devon; he was his usual happy self, having fun crabbing with his older brother Isaac. Reuben had been ill for 3 weeks on and off and despite several doctors visits, nobody was unduly worried. He would be sick in a morning and then he would recover within minutes and be fine for the rest of the day. A tell-tale sign for things to come, but never in their wildest nightmares could they have known what was about to happen.

Reuben had a fall and became pale and distressed. His worried parents took him to A & E at Barnstaple Hospital and when Reuben failed to respond to some routine tests he was sent for a CT scan. The scan showed a large mass on his brain, which they suspected to be a tumour.

He was quickly transferred to the neurological unit at Frenchay Hospital by air ambulance where he underwent hours of surgery to relieve the pressure on his brain. Plans were quickly put in place for further surgery but sadly Reuben arrested during the night and his organs began to fail, despite fighting his way through another 5 hour operation. Some two days later he was too poorly to undergo any further surgery. He was transferred again to PICU at Bristol Children’s Hospital so they could help his organs to recover. 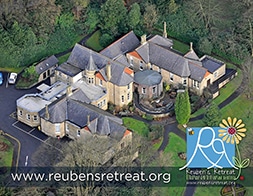