Liam, aged 22, has a mild learning disability and autism. After finishing college, he was put in touch with Mencap’s employment team in September 2019 where he was given a place on the supported internship programme. The programme supports young people with a learning disability make the important step from education into employment, and ultimately helps secure the right job for them. 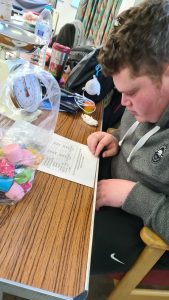 Liam was given a second chance at the programme in September 2020 due to Covid-19 and the restrictions brought on by the lockdown that got in the way of his job search. He was feeling down about things, missing his friends and unsure what to do to next. Desperate to fulfil his passion for animals, Liam wanted a job that allowed him to be around animals, but he wasn’t sure how to make that happen.

Emma who works in Mencap’s Employment team explains: “Liam was very anxious and shy when we first met him. He would barely speak to anyone and wasn’t very confident. We assigned him a job coach to support him with his job search and help identify what sort of role would suit him. We knew how much he loved animals so we got in touch with a local farm to see if we could get him some work experience there. We managed to get him an interview at a local attraction – Hoo Farm Animal Kingdom. This felt perfect for Liam, but he was very anxious about the interview process.”

Liam’s job coach helped prepare him for the interview and he did so well that he was offered one day a week working on the farm. During his first shift, he was tasked with cleaning enclosures and at the end of his shift, he got to hold his favourite animal – a snake.

Liam said: “Animals are my passion – if I get stressed then being around animals helps me de-stress and calm down. I was so happy when I got the job at Hoo Farm and it was so cool getting to hold a snake – it’s my favourite animal because they’re fearless and brave and that’s how I want to be.”

Liam’s confidence began to grow the more shifts he did on the farm and this was noticed by other staff members. Liam was therefore asked to shadow staff who were going to be interacting with the public so he could experience a different side to the job.
Liam got involved in animal time in the barn – this is where visitors are invited to stroke and touch the animal whilst the keeper gives a brief talk and shares facts about the animal. For Liam to be standing in front of a room full of people was progress and something he would never have done at the start of his placement.

During one session, the keeper was talking about porcupines and during the session asked Liam to feed the porcupines. With no prompting, Liam picked up a porcupine quill off the floor and began talking about it to the public. He passed the quill along and answered questions he was asked about the quill, looking to the keeper for confirmation that he was giving the right information – information he had only heard the previous week when another keeper was doing the same talk.

Emma explains why this was such a big moment in Liam’s journey: “Liam blew me away when he started to talk to the public – this is something I never thought he would do, let alone after only four weeks in placement. To watch him grow in confidence has been amazing.”

Will Dorrell, one of the partners of Hoo Farm also commented on how impressed the team have been with Liam’s progress: “We are very pleased with the improvements that Liam has made during his time with us. He is far more confident and willing to ask questions and seems much more at ease around the animals. The difference in Liam during his first spell with us and his Mencap supported time is astronomical.”

Liam said: “Before I came to Mencap my main goal was animals but I didn’t know how to make it my job. Mencap have helped me a lot – I love my job at Hoo Farm and I am much happier and more confident.”

Liam isn’t at the farm at the moment as it is closed to the public due to the lockdown, but Liam has been assured that he will be going back once out we are out of lockdown.

Liam returned to the farm, now known at Hoo Zoo and Dinosaur park, on 14th April and was warmly welcomed by all staff. Liam was very happy to be back in his ‘happy place’.
Liam has always struggled with maths and would often disengage when the tutor would do a maths session.

Becky at the zoo, has taken Liam under her wing and has been supporting Liam with his maths and English whilst he has been in placement. Becky has been supporting Liam to read the diet sheets for the different animals and weigh out the different food types, not on a digital scale! Liam was given a copy of the diet sheets to take away and practice. We bought him a set of scales and some playdoh and now Liam loves to do maths, addition, subtraction and multiplication, all using the diet sheets given to him by the zoo. Liam has actually said that he ‘loves learning maths’!

The caseworker is now starting to withdraw the support at the zoo and leaving him with the support of the amazing staff at the zoo. Liam enjoys break times, sitting with the other staff and volunteers, chatting with them and laughing. This is something Liam was anxious about doing but is now a social butterfly!

We have sourced a City and Guilds, level 2 course in animal care for Liam, which will help to grow his knowledge of animals and gain him a qualification!