Chloe lives with Crohn’s and knows the value of being supported by those around her, especially her partner, Ben. However, it wasn’t always easy for Chloe to be open about her condition and it took a major, difficult incident for things to change. 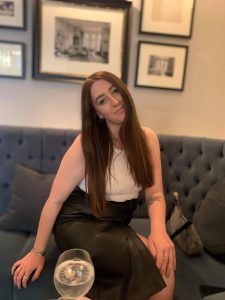 When I was 17, I was diagnosed with a disease I had never even heard of, after months of being violently ill and losing weight at an alarming rate. I am now 26 and have spent these last 9 years trying to navigate my own way through dealing with Crohn’s and trying to live as normal a life as possible.

None of us truly know what is happening inside someone else’s body, even if they look fine on the outside. What I surprisingly found most hurtful was that, when I was at my worst in a flare up, had lost so much weight and felt constantly drained, people would congratulate me on my weight loss and compliment me for being so thin. It made me want to scream and tell those people how I was so thin. It was because I could barely eat and whatever I did eat came straight back up.

In 2017, when I met Ben, I was in remission and had been stable for about 3 years. I had mentioned to him that I have Crohn’s but never went into detail. About 6 months into the relationship I started to feel the symptoms return and I became incredibly ill, almost overnight. I couldn’t eat, was running backwards and forwards to the bathroom and being sick throughout the day. We worked together in the same place and Ben’s house was much closer to work, so I had started to stay over more often on nights when I was working late. As my flare up started to get worse, I had less energy and the 30-minute drive home became harder, so he offered to let me stay whenever was needed.

“As my flare up started to worsen, so did the ability to hide it from Ben”

He never directly asked me about it and I never shared details, but he started waiting outside with water if I was being sick and asking me if I was feeling okay when I had spent a lot of time in the bathroom. He even offered to go into work for me if he was on a day off and I was feeling weaker or had a bad morning. It helped me become less embarrassed over time about what was happening to me.

I think he really started to understand how self-conscious I can feel when one day at work I had gone to use the disabled toilet. When I was inside I heard a knock and so I called out ‘just a minute’ and tried to rush but it’s hard when you are ill and the pain is all-consuming. The person on the other side of the door knocked again. Eventually I came out and there was a young girl on the other side of the door with a walking frame, her parents beside her. I apologised for being so long and started to walk along the corridor.

“I was absolutely mortified. There were people staring and I could feel myself going bright red”

As I turned I saw the father of the young girl behind me, he said ‘excuse me’ so I stopped. He loudly asked me if I was able-bodied and when I didn’t respond he repeated the question, shouting. ‘Yes’ I said. ‘Well why were you in the disabled toilet? My daughter is disabled, and she had to wait for you’. I apologised to the man and explained that I had every right to be in there and that disabilities are not just on the outside. He stormed off in the end and I went back to my office shaking and crying.

After this incident I decided to be more open with my partner and in return it has helped me be more open with others. Ben was so angry and shocked when I told him, and I think that’s when he started to realise how embarrassed it made me feel. I am more open with my manager at work so that if I do need a day, if I feel drained or sick, I don’t have to hide it.

“Being open has also helped me manage my illness better” 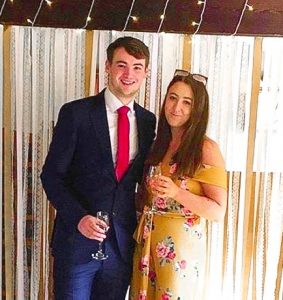 Ben very much helps me by planning our meals around what I can eat and, if I am perfectly honest, he is way stricter with our diet than I am! I will admit my willpower is not very strong and I am a sucker for cheese even though I know dairy is one of my trigger foods. Ben helps to keep me away from the cheese and we eat foods that cause me the least distress when I am in a flare up.

Being open about my disease, even the not so glamourous parts, with my partner freed me up to be open to my friends and family. I feel less stressed when I am having a bad day and can focus on what my body needs rather than spending all of my energy trying to hide from everyone. My body might not work as well as other peoples do but it is still my body and I am not ashamed of it.

You can read more stories like Chloe’s over at Crohn’s & Colitis UK.

This story was provided by Crohn’s & Colitis UK. An estimated 500,000 people in the UK are living with a lifelong disease that many people have never heard of. Because of the stigma and misunderstanding surrounding these diseases, thousands of people are suffering in silence. But they’re not alone. Crohn’s & Colitis UK are here for them. To improve diagnosis and treatment, and to fund research into a cure; to raise awareness and to give people hope, comfort and confidence to live freer, fuller lives. They’re here for everyone affected by Crohn’s and Colitis.