In the 1960s more than 7 out of 10 heart attacks in the UK were fatal, but thanks to research, there’s been a revolution in how we treat heart attacks and today at least 7 out of 10 people survive. Before the mid-1970s, nobody really understood what caused heart attacks.

On 7 April 2020, 66-year-old Alice Timmons put her chest pain down to indigestion. By the following afternoon, the pain hadn’t gone away but Alice was reluctant to get help.

It was during the first wave of the Covid-19 pandemic and she thought ‘they’re busy, there’s probably nothing wrong with me and I hate being a drama queen.’ But thankfully, after taking advice from a GP, she did seek help. And, when she was later admitted and assessed, cardiologists discovered that one of the major arteries in her heart was almost completely blocked and she had experienced a heart attack. 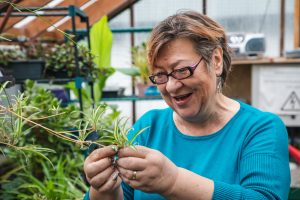 Before Alice’s stent was fitted she was given a clot busting drug which would have thinned the blood and helped to dissolve the clot, restoring blood flow through the artery so that the stent could then be fitted. Getting this diagnosis in time meant Alice could be fitted with a stent and is now back home continuing her recovery. In her words, ‘I’m home now. Tired, emotional, but probably feeling better than I have for ages.’